Sourdough, Cioppino, maybe the Burrito. Irish Coffee, Green Goddess Dressing, or Dungeness Crab Louis if you're getting a bit more in depth.  And no, for those of you reading in Tulsa or Omaha, definitely not the namesake "treat," Rice-a-Roni.  There are several culinary specialties native to San Francisco that enjoy worldwide fame.  However, there is one dish in particular that doesn't receive much attention, and that is the Hangtown Fry.  But first, a little background.

Many people hear San Francisco and think ultra-liberal, hippies, sustainable, smug, cable cars, etc.  And all of this is true in some way, the good and the bad.  It's a great place with many forward thinking people, but they do tend to know it, and are more than happy to let you know it, too.  I'd feel bad for saying that, if I weren't one of them.  However, I haven't found a better place to live in the US.  Now, rewind 160 years. San Francisco and the surrounding area was a very different place with a very different culture.

Northern California was prospectors' territory, not exactly attracting your educated, upright-citizen elite.  The Gold Rush lured the down-on-their-luck who wanted to hit pay dirt (literally), and, in turn, those who wanted to relieve them of their newly found fortunes.  All of this wealth soon brought plenty of booze, brothels, and baccarat.  Wrought with vice, San Francisco replaced New Orleans as the major US gambling Mecca.  All those little alleys in SOMA with female names: Jessie St., Minna St.  Legend has it they're named after famous SF ladies-of-the-night.  Point is, the City and Northern California were much seedier places than they are now.  And with so many unsavory characters running amok, a reactionary capital punishment system soon followed.

This brings us to Hangtown, now known as Placerville, located a little more than 100 miles northeast of San Francisco.  Originally called Old Dry Diggings (due to the fashion of panning in the area), it was a forty-niner community that sprung up close to Coloma, where gold was first discovered in California.  As a center of the "Wild West" of California, the population of Old Dry Diggings quickly grew from hundreds to thousands.  As the riches and population grew, so did the crime.  Residents soon took matters into their own hands and began executing the offenders by hanging, namely three men at a large oak tree in the center of the town in 1849, leading to the name "Hangtown."

The Hangtown Fry, itself, has quite a few stories behind it.  The most widely accepted version is that a man, just having struck it rich, walked into the El Dorado Hotel and asked for the most expensive dish in the house.  The cook came out of the kitchen and said the most expensive items he had were eggs, which were fragile and had to be carefully carted into town, bacon, which had to be shipped from the East coast, and Oysters, which had to be packed in ice and brought in from San Francisco daily.  According to Doug Noble, El Dorado County writer and historian, the prospector responded with "scramble me up a whole mess of eggs and Oysters, throw in some bacon and serve 'em up."  The result:  The Hangtown Fry 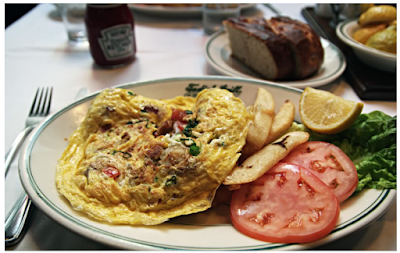 This is considered one of the closest to the original versions of the Hangtown Fry, served at Tadich Grill, California's oldest restaurant.  Dining there is quite the experience.  Martinis, manhattans, veteran bartenders dressed in white lab coats, marking them as doctors of "inebriology."  It has a certain 1950's Madison Ave. feel to it, where I'm sure million dollar Pacific Stock Exchange deals were brokered over charbroiled chops and Crown Royal. Check out Anthony Bourdain's visit to Tadich Grill here.

The version of the Hangtown Fry's origin I prefer, despite likely being apocryphal, begins with an unnamed man on death row in 1850s Hangtown.  When asked what he would like for his last meal, he didn't go with the traditional, opulent Diamond Jim Brady style 32 oz. steak and potatoes.  Rather, knowing the difficulty to obtain the ingredients, he ordered bacon, eggs, and Oysters.  All of these items would have to be shipped into town, delaying his execution by at least a day or two.  Did it work?  I'd like to think so.  If not, there's still a silver lining in the delectable dish that was born out of his doom.  Perhaps the original California Cuisine.

It's a pretty tasty omelette.  I mean, bacon and Oysters.  Kind of hard to mess up.  Cured meats and shellfish are one of those brilliant marriages in any form.  It would certainly be on my short list of last meals.  So, I thought I'd try my hand at making it, but with a little more contemporary kick.  Butter griddled English muffin, sauteed spinach, thick cut slab bacon, sunny side up egg, and corn flour Old Bay fried Oysters. 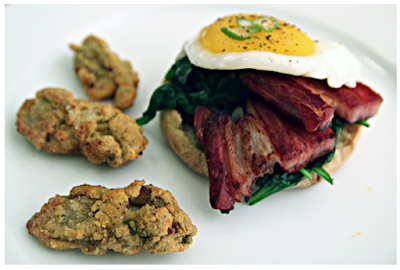 The only thing that's missing is the sauce.  I couldn't decide on what to add.  Hollandaise, red pepper coulis, mornay?  Any and all suggestions are welcomed, so please share your thoughts.  And, of course, get out and try the rare and delicious bite into California history that is the Hangtown Fry for yourself.

The SF Oyster Nerd
Philadelphia, PA
Just an ostreaphile taking on the global oyster and seafood scene one shuck at a time.