I was recently watching the Botany of Desire again, since Netflix sucks at updating its streaming service with new material.  Not a major issue as it's a great PBS documentary based on Michael Pollan's book about the co-evolution of plants and people.  He explores the idea that it's been in several plants' best interest to become domesticated and evolve characteristics that humans desire. This, in turn, caused humans to be the "bumblebees" of these plants, spreading their seed around the world and ensuring their successful propagation.  Perhaps you've seen it or even read it (which I shamefully have yet to do).  It's very identifiable seeing as how Pollan  anthropomorphizes the plants, almost claiming they purposefully become more and more desirable.

The apple, for example, was widely cultivated throughout North America in the early 1800's.  These apples were not as we know them today, though.  They were mostly bitter, astringent crab apples, used for making hard cider.  These inedible apples are actually said to make the best cider.  But, every once in a while, a rare seed-to-tree would produce a delectably sweet apple.  By the 1900's, farmers began singling out these trees and grafting them to produce more and more sweet apples.  Today we know them as the Red Delicious, Green Delicious,  Baldwin, etc.  So, we now all enjoy this tasty fruit and the apple has secured its global proliferation.

All good and interesting.  However, what most fascinated me was Pollan's discussion of the 1830's cider scourge in the US.  Cider was the drink of the age, much like wine or beer today.  It was even consumed more than water, since rampant cholera and typhoid epidemics were known to come from contaminated drinking water.  It's popularity grew which lead to saloons and countrysides full of drunkards.  The apple became demonized and was seen as evil, intoxicating the masses.  It only recovered once the grafting of sweet apples became the standard. 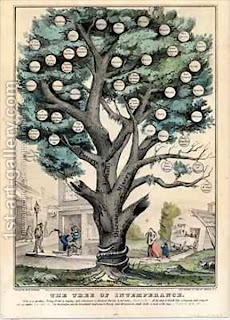 The Tree of Intemperance with Hard Cider at its Roots

But, during this time, I think quite a few flagons of cider were downed with quite a few dozen oysters.  They paired so well together, in flavor and in culture.  Both slightly taboo, earmarks of poverty, and akin to debauchery.  I'm sure that Manhattan's Five Points had plenty of Dickensian oyster cellars full of cider and unsavory patrons consuming both.

And the characteristics of a good sparkling cider seem to be the precise qualities one looks for in an oyster drink pairing.  Crisp, tart, dry or semi-dry, slightly acidic, effervescent.  The basic production of them is the same as wine.  Press the apples for their juice and ferment the juice with added or naturally occurring yeast, turning its sugars into alcohol.  This also means that ciders, like wines and oysters, have terroir.  The same apples may be grown in different areas producing different biochemical components in them leading to very different ciders. 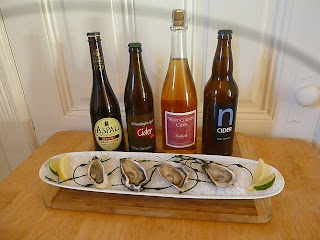 So, to explore further, I found myself biking around SF on a chilly Monday looking for some nice ciders.  Considering that I really didn't know much about the drink, I went to Healthy Spirits , a Castro beer/bourbon store with an incredibly knowledgeable staff that has no problem talking spirits for an hour.  Though they have a limited selection, the owner provided me with some great recommendations and information.  I wanted to get a four different ciders, varying in style, region, and level of production to try with four different oysters.

Aspall English Demi-Sec Draft Cider
Pretty widely available cider produced in Suffolk, England since 1728. It did not specify any apple varietal, so I assumed it was a blend.  It was floral, crisp, dry, and very champagne-esque.  It had a decent ripe apple sweetness to it, as well.

Tieton Cider Works - Wild Washington Semi-Dry
Tieton seemed to be one of the other widely available ciders.  It was made out of a blend of apples in the namesake town of Tieton, Washington.  Washington is famous for its apples and oysters, so I had to get one.  In comparison to the other three, this was a very mellow, low-carbonated, smooth cider.  It also had a very muddy, disagreeable after taste.

West County Cider - Redfield
A smaller production where the owners both grow the apples and make the cider out of Shelburne, Massachusetts.  They also ferment with the natural apple skin yeast and not champagne yeast like most sparkling ciders do.  Being 75% Redfield apple, it had a rose color from the scarlet fleshed variety.  It was grassy on the nose, had a strong barnyard flavor with tartness and an alkaline finish.

N Cider
I had to get a local cider, right?  Made by Murray Ciders out of Petaluma, California, it's a blend of organic Sonoma County apples and twice fermented, giving it a champagne carbonation.  It was cloudy, had an extremely harsh citrus nose, was astringent, overly tart, and tasted like lemon juice.  In hindsight, I wish I had gone with Murray's Cyder, the company's primary cider.  I even bought a second bottle of N Cider, just to make sure the one I had wasn't oxidized.  But, sure enough, same characteristics.

Church Point
This Pacific oyster is intertidal beach grown and partly tumbled by the Sea Fresh Farms cooperative out of Hammersly Inlet, Washington.  It's a medium-cupped, fluted oyster with a very high liquor (oyster juice) content and has a nice artichoke/cucumber finish.  It's also a triploid oyster, meaning it never gets spawny or creamy.

Drakes Bay
Local Pacific oyster bag-to-beach grown by the Lunny Family in Drakes Estero in Point Reyes, California.  I had to use it, not only because it's a great oyster but may not be around much longer because of the damn National Park Service and a misguided Ken Salazar.  Hopefully you're familiar and hopefully the Lunny's litigation fight turns the decision around.  It is very briny, a little creamy and has a great bitter-herb finish.

Effingham
Another Pacific oyster grown in suspension trays and partly tumbled by Northwest Aquaculture in Barkley Sound, Vancouver Island.  The Effingham is larger, plump, has a cream colored flesh and a subtle watermelon finish.

Village Bay
The only Atlantic oyster in my selection, Village Bays are suspension tray grown in Bedec Bay, New Brunswick.  They are very similar to the famous Beausoleil oyster from the same region.  They're medium sized, snappy, mild with a fresh baked bread aroma and a gamier clam-like finish.

Now, to the pairings.  Two ciders immediately eliminated: Tieton and N Cider.  If it's not a good cider to start with, it's not going to pair well with anything.  Perhaps not dogma, but I tried them and they didn't work.  I was left with four oysters and two ciders.  What immediately became apparent was that a strongly flavored oyster was needed to stand up to the pungency of even the dryer, less tart ciders.  Effinghams and Church Points were completely overwhelmed by both the Aspall and the West County.


Two wonderful pairings did come out of the tasting, though, and they were the Drakes with the Aspall and the Village Bay with the West County.  Quite the opposite of what I had expected, actually.  I imagined the barnyard flavored West County would go nicely with the more vegetal Pacific oyster and the Aspall with the minerally Atlantic oysters.


However, the Aspall and Drakes went great together.  None of the Drakes celebrated qualities were lost while drinking the Aspall.  Slight fruitiness to begin cut by the strong salinity in the Drakes, finished with the refreshing effervescence of another sip.  Certainly a pairing I'd love to enjoy while sitting bayside in San Francisco.


Though this experiment had not gone as I had expected in proving that ciders and oysters pair brilliantly, it did confirm that a few ciders and a few stronger oysters do work amazingly in tandem.  In my eyes, this is just the beginning to a long and "fruitful" adventure. 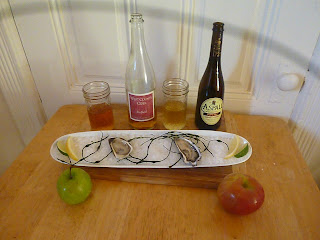 
Naturally, after having drunk nearly three bottles of cider mostly to myself on a Monday afternoon (it's tough doing blog research, man) I got a little audacious.  I figured brunoise some shallots and apples, add equal parts of the Aspall and apple cider vinegar, and you've got yourself a spot-on mignonette.  It proved true.  I had my brother try it for confirmation.  It definitely worked, and it wasn't just the cider talking. 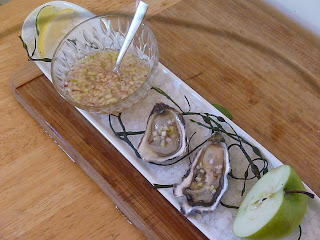 
My cider and oyster pairing was an amazing experience.  It lead me to do everything I try to achieve in a post.  Explore and learn about new things, enjoy the process of trying out new ideas, and sharing those ideas and their end results with others.  Hopefully you too get the chance, soon, to try sparkling hard ciders and oysters together.

Posted by The SF Oyster Nerd

The SF Oyster Nerd
Philadelphia, PA
Just an ostreaphile taking on the global oyster and seafood scene one shuck at a time.